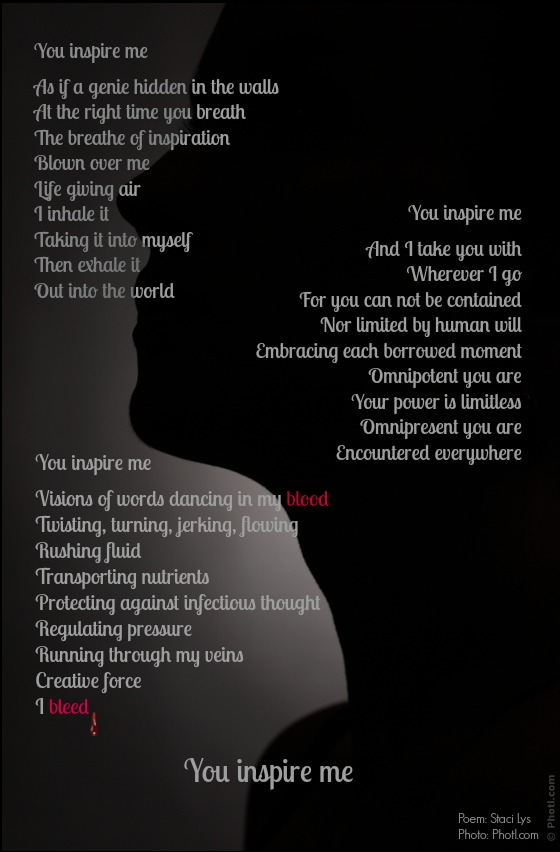 I love to create. I believe we were made to create. It’s like a driving force within. There’s a certain high that comes with creating something. The inspiration high.

I have become a fan of the Ted Talks. I don’t like much of what is on TV, so when I want to relax and watch something, I go to YouTube and put on a Ted talk. Recently I watched the one by Elizabeth Gilbert, the author of ‘Eat, Pray, Love’. She spoke about creativity and how it could be divinely inspired. She shared the following:

In ancient Greece and ancient Rome people did not happen to believe that creativity came from human beings back then. People believed that creativity was this divine attendant spirit that came to human beings from some distant and unknowable source for distant and unknowable reasons. The Greeks famously called these divine attendant spirits of creativity ‘Daemons’. Socrates famously believed that he had a Daemon who spoke to him from afar. The Romans had the same idea but they called that sort of disembodied spirit a ‘Genius’, which was great because the Romans did not actually think that a genius was a particularly clever individual, they believed that a genius was this sort of magical divine entity who was believed to literally live in the walls of an artist’s studio … and who would come out and invisibly assist the artist with their work and who would shape the outcome of that work (source).

Now I don’t believe that there are genius’ in the walls, but I do believe that creativity and inspiration is divine. Something that has been carved – breathed – into each of us. Like I mentioned in a past post, we all have an impulse to create. It’s in our veins.

Do you love to create? Do you believe that we were made to create? Where do you think creativity and inspiration comes from?

This poem was written in response to this week’s prompt of ‘The Reverie’ poetic publication journal. The challenge was to write a poem of 31 lines.

I’m just a simple girl that is passionate about being relevant and making a difference in this world. World traveler, lover of bright sunny days, experiencing cultures, good friends and conversation. I love my God and love my family. I don’t believe that I have the Truth, but that I have a relationship with Truth and want to be closer to Him. Canadian, born and raised in Vancouver, BC. YWAMer since 2000 and have traveled and lived all over the world –Hong Kong, China, India, Bangladesh, Nepal, Afghanistan, Turkey, Germany, Argentina, Australia and The USA. I moved to Brazil in 2002, married an awesome “Baiano”, Daniel, and we have two adorable kiddies, Caue and Hannah. I am certified in fitness and nutrition and conducted physical conditioning classes while working with an arts and evangelism team and schools. I am also certified in TESOL (Teaching English to Speakers of Other Languages) and TEYL (Teaching English to Young Learners). "A God Coloured Girl in a Grey World" is my blog where I write articles based on my faith, post fitness routines, recipes and other health and wellness stuff. You can also check out a bit of my music at www.myspace.com/stacilys View all posts by stacilys

56 thoughts on “You Inspire Me”