“I will rebuild you with stones of turquoise”.
Way back about 18 years ago (more or less) someone told me that the struggles I was going through were necessary for my growth. In order to be stable and have a firm foundation, I needed to go through them. At the time I hated it. I was an emotional wreck, constantly questioning myself, my thoughts, my faith, my feelings… I used to be run by my feelings, but have since learned that life can’t be lived that way. Oftentimes feelings blind and deceive.
I recently came upon the above quote in the book of Isaiah. it speaks of the rebuilding of a city with precious stones, such as stones of turquoise. Turquoise has been known to symbolize wholeness, spiritual grounding and emotional balance.
I believe my friend was right. I’ve gone through a lot, but it really has served me well. I have been rebuilt with stones of turquoise.
How do you see the struggles of life? Do you allow them to cause growth?

Inspired by a post that a fellow blogger, Pete, wrote, I have decided to do a series on ‘Love is…’ I don’t know how often I will post a ‘Love is…’ post, but today marks the first one.

Love me more than what you feel

Still my mind with love of will

Will you love me with your deeds

Truly chooses each day to do

Do the best, seek from above

Above to learn to really love.

Last weekend I was sick, and couldn’t do much around the house. My husband was so good at taking care of the kids, tidying up and serving me.

The above loop poem was actually the response to a challenge I accepted some time ago, which was to write a poem about love in 10 sentences. It is a little (ok quite) cheesy, but thought it appropriate for the message for ‘Love is…’ today.

What would be your, ‘Love is…’ message for this week?

Have you ever seen a crimson rose? I have only seen them in photos, but never in real life. They are beautiful and have a deep, rich color. So deep that sometimes they can even resemble the color of blood.

It’s meaning is two-way, signifying loss, death and mourning, as well as rebirth and love. It makes me think of a love that is committed and passionate. One that is willing to sacrifice for the good of another. One that is even willing to die for another. This type of love is a rare and beautiful thing.

Are you an expert in anything? In art? In poetry? In photography? In parenting? In life? In anything at all?

The little drummer boy wasn’t, and he knew it. Heck, he was just a kid. An insignificant little boy. He probably came from a humble background. Maybe his father was a shepherd, which wasn’t considered a first class profession.

One thing he did possess though was curiosity and wonder. Like any little child, he wanted to know what all the excitement was about. “Come!” they told him. “A king has been born and we are taking our finest gifts to honor him.”

That little boy didn’t care if he was amongst the elite. Those that had fine gold and perfume. Those that possessed wealth and wisdom.

When they arrived at the humble stable, the little boy noticed that Jesus was just a poor boy, like him. He had to be, because the rich don’t have babies in stables. He knew, though, that Jesus was special. He was a king. The little boy didn’t feel like he had anything to offer him that would be worthy of honor. Nothing that would be fit for a king. He so badly wanted to give Jesus something, so he offered to play his drum for him. That’s all he had. Nothing material. Nothing with a price tag. Just his little drum that he carried around his neck.

So he played his drum for Jesus. Even the animals swayed with the tune. He played his very best for him, which was probably not perfect, being that he was just a young boy. He played with passion, and gave it his all. He knew he was doing it for a king.

The above article was written for the faith arts community, His Kingdom Come, where devotional articles are being published daily for the advent season.

Do you have a special place to go where you know you’ll find peace? Maybe it’s somewhere in nature? Or it could be in a crowded mall where nobody knows who you are?

I often find peace sitting on my living room couch. I go there to have my morning coffee and quiet time.

Forget-me-not flowers hold intimate meaning. They signify true love. Faithful love. They also symbolize eternal remembrance.  That’s why I chose to paint these flowers to go along with this poem. The peace I have doesn’t come from some abstract, spiritual experience. It comes out of a relationship of true, faithful and eternal love that lives within me.

You can’t buy a peaceful love like that. It’s priceless. It’s a peace that passes all understanding. A peace that isn’t dependent on circumstances or surroundings. I wouldn’t trade it for anything.

Do you have a special place where you find peace? What does ‘peace’ mean to you? Do you know true, faithful, intimate love?

Have you ever wanted something so bad that it didn’t matter the circumstances, you went for it? That’s what happened with this woman. She knew she was dirty. She knew her life was empty and aimless. She knew that nobody respected her, especially the religious folk.

She had heard about this miracle worker and how he accepted all that were broken – the outcasts and those that society despised. She knew he would accept her. All other men looked at her as an object to be used and thrown away, and this stripped her of every ounce of dignity she had.

That’s what I love about this man. Grace, pure grace. And unconditional love. Coming to Him with a brokenness and an understanding that there is great need for forgiveness.

Have you ever wanted something so bad that it didn’t matter the circumstances, you went for it? Tell your story. 🙂

Just a simple piece to start out the week. I don’t feel like it’s quite finished yet, but this is what I’ve got at the moment.

A very happy Labor Day to all of my Canadian and American friends. As for us down south, it’s Brazil’s Independence Day. I’m off to enjoy a bowl of Acaí cream with my family.

I would like to thank the talented Pepperanne from Field of Thorns for nominating me for a Timed Word Challenge. My topic was ECHO. My word count is 97.

Below are the rules, and your topic will be at the very bottom.  Have fun, and make sure you visit Pepperanne over at Field of Thorns.

1) Open an MS word document (or any other editor).
2) Set a stop watch or a mobile for 5-10 minutes.
3) Your topic is at the foot of this post.  DO NOT SCROLL DOWN TO SEE IT UNTIL YOU ARE READY WITH A TIMER.
4) Fill the word document with as much wordage as you want, once you start writing, don’t stop.
5) DO NOT cheat by going back and correcting spellings and grammar with spell check (this is only meant for you to reflect on your control over sensible thought flow).
6) You may or may not pay attention to punctuation and capitals.
7) At the end of your post write down the number of words.
8) Do not forget to copy and paste the entire passage to your blog post with a new topic.

Ahhhhh, it’s so good to be back. I’ve missed blogging. My big move and all the craziness in my life these past few weeks (months actually) have taken a toll on me. I’m back on WordPress now, and hoping to settle into my new normal and routine. Can’t wait to reconnect.

Don’t you love that word, ‘pursuit’? It makes me think of using all of one’s strength in the quest of accomplishing something of importance. The Free Dictionary gives the following definitions:

Being that I’m a Christian, I like to read the Bible. There’s this one passage where a number of Jesus’ followers turned away, because what he was teaching them seemed too tough to swallow. When he asked his closest friends if they were going to leave him too, one said, “…to whom would we go? You have the words of real, eternal life.” That’s a pretty heavy statement, but I believe it.

My pursuit then, will be for Truth. I don’t understand it all, and expect I never will. But when you find something so good, so fulfilling, so meaningful and freeing – it’s something you want to grab on to with both hands and never let go.

Have you ever pursued something? Have you ever grabbed on with both hands and not let go until you’ve attained it? Would love to know your experience hmmmmmm… 🙂

I’m part of an international creative community online called, His Kingdom Come. This is my response for this week’s prompt. 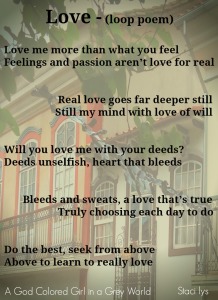 Let me start out by saying I cheated. The challenge I received from A Blind Bird was to write a poem about love in 10 sentences. Each sentence is suppose to contain the word ‘love’ and have only four words in each sentence – Oops. Actually, I hadn’t noticed that I was suppose to do that, and I had finished this by the time I realized it. I’m also suppose to include a favourite quote about love and challenge ten other bloggers.

Quote: ““Love is not affectionate feeling, but a steady wish for the loved person’s ultimate good as far as it can be obtained.” –C.S. Lewis

I chose this quote because of the way so people now-a-day view love – as a feeling, emotion, passion, etc. So longing one has the ‘feeling’ of love, one is ‘in love’. Once the feeling of love is gone, the relationship is discarded. Whether others are hurt or not.

Love is such a vague word actually. If you would like to read further thoughts of mine on love, and its meanings, you can do so here, here, here, here and here.

Ok, now for my nominations:

The Breakdown of Taboo

Love Notes from the Angels